‘Electric’ and ‘totally awesome’ best describes the atmosphere at ANZ Stadium as I sat in the best seat in the house amongst 84,000 noisy State of Origin fans. Queensland have won the best of 3 series every year since 2005 – amazingly before Facebook or the IPhone existed! But after 80 minutes, June 18 saw NSW produce a 6 – 4 score line and turn 9 years of losing into a very emotional and jubilant win.

It was a couple of hours after the game that I asked Captain Paul Gallen and Coach Laurie Daley, “What did you differently?” They responded with “First we redefined the team values – what we stood for as a group and how we wanted to be seen and remembered – by constantly focusing on the ingredients required for a winning culture; leadership, discipline, preparation, self-belief, trust and comradery. Second, we ensured all 17 team members understand exactly what their role was and what their individual goals were for the team to achieve ultimate success. This was summarised into 3 – 5 key points which each player would repeat at meal time. Everyone was clear about their job, they took ownership of it and they visualised the execution needed. They also knew what was expected of the other team members and gained confidence watching them reiterate and publicly commit.”

A number of Australia’s major retailers could benefit by applying the above practices with their top 20 staff. Each should be very clear on their role but also understand what their colleagues are doing and should be confident they are 100% committed to the task. It seems logical to underpin a company culture with strong but supportive leadership, open communication, trust and a comradely where executives really want to win for each other. Then flow that down to the shop floor, your buyers, marketing and even accounting… everyone pushing in the same direction. Can you imagine the results we’d see and more importantly the difference customers would feel and experience?

Sleeping out on the streets of Redfern the following night gave me one of the most humbling experiences I’ve ever had. I left the office just after dark dressed in track pants, fleecy jacket and beanie carrying a sleeping bag and small pillow. Together with 200 CEO’s I would grab 2 bits of cardboard and find a clearing on a concrete floor which would be “home” for the night. Several retailers also braved the cold including ALDI’s Stefan Kopp, Orton’s Mark Newman and Dionne Sinay & Rob Hunt from TVSN. But it was the words of Best and Less CEO Holly Kramer who raised a massive $212,000 that impressed me most. Holly explained that after joining the company 14 months ago, she invited all staff to get behind her ‘sleep out’ and exposed them to the way Vinnies distributes its funds among the homeless. She said that the cultural benefits Best and Less receives through their Vinnies association made her actually want to thank them. It has galvanised not only her executive team but also those that work on the shop floor. Staff love it. They are coming up with ideas to share the story with customers, they are running their own fund-raising campaigns and they are keen to follow where the donations actually end up. This results in increased engagement, an added sense of purpose, greater unity and comradery – perhaps not too dissimilar to what gave the NSW Blues a winning culture. These were all benefits Best and Less saw flow from head office through to the shop floor.

As I slowly ate my dinner of half a cup of pumpkin soup, a 2-day old bread role and a homemade biscuit, we learnt that Vinnie’s – St Vincent De Paul Society – is all about helping the 105,000 Australians who don’t have a bed to sleep in. 47,000 of which are women and nearly 11,000 are kids aged under 18. 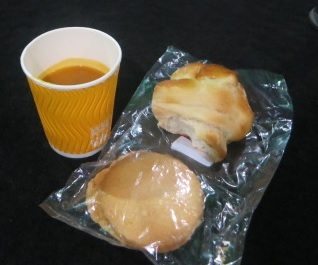 Come 11:00pm the lights went down and I crawled onto my sheet of cardboard and erected the 2nd piece above me as a shelter. The concrete felt cold and hard, but I would be going home tomorrow unlike the real homeless who are not only hungry, cold and without comfort and safety, but sadly in addition they lose their dignity – not for one night but every night.

I was also moved by a well-dressed stylish successful business woman who relayed to me that as an 8-year-old, together with her Mum, they fled a violent household and were homeless for several weeks. She recalls Vinnies supplied a 2nd hand uniform which she wore to her new school with great pride. “When you have nothing, anything is wonderful. The real hard part is when the police come and move you on from a ‘comfy’ spot and you have to find somewhere else – you almost feel like you’ve lost your home again”. I tossed and turned and reflected on all that I’d seen and learnt in the last 36 hours, before waking at 5:00am to gather my stuff and walk off into the darkness… 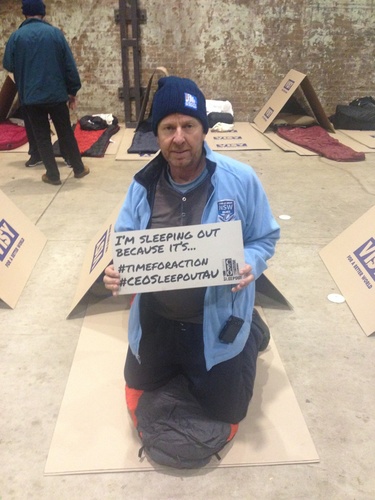 So how can you help?  Go to www.ceosleepout.org.au and look up Garry Connell or Trak Recruiting and make a small (or big) donation. Any donation of $50 or more made before July 9th 2014 will go into the draw to win the NSW Blues jumper signed by all 17 players on the night they won the 2014 series (it’s currently being framed). The winner will be drawn by Paul Gallen on the eve of game 3 and if you win it and are not interested in footy, I‘ll buy it back off you for $500! All donations are tax deductible and may make a little change (such as a smile you would see on an 8 year olds face as she starts school in an “almost” new school uniform) which may have a domino effect and get somebody off the streets forever.